This carefully designed itinerary has been specially put together to give you a taste of beautiful Nova Scotia. Parcelled up into a 13-night fly drive package you will begin your adventure in Halifax and travel along the coast to the picturesque South Shore before heading to Cape Breton Island. Enjoy lobsters and other fresh seafood as well as lighthouses, acres of green lands and natural wonders! Whales, canoes and hiking trails are going to be your daily routine!

Upgrades
Celebrating anything?
Treat yourself and upgrade your flight or other holiday components

Arrive at Halifax International Airport and transfer independently to your downtown hotel. Remainder of the day is at leisure for exploring this bustling oceanside city. Overnight in Halifax.

Today you travel west along the Nova Scotia coast through the outlying skirts of Halifax. Traversing the shoreline of beautiful St. Margaret’s Bay, you arrive in the picturesque Western Shore area, just across the water from the magnificent and mysterious Oak Island. Overnight in Western Shore.

Your resort is located on the beautiful southern shores of Nova Scotia with breath-taking views of Mahone Bay and legendary Oak Island. Spend the day exploring this delightful area and go for a stroll along the resort’s seaside trail. Perhaps try a traditional Nova Scotia dish while enjoying the spectacular views of the water as sailboats glide gently across the bay. Overnight in Western Shore.

Today you head west and cross the heart of Nova Scotia and the near pristine wilderness that is home to a wide variety of woodland animals. You may wish to make a stop for a day hike at Kejimkujik National Park and National Historic Site. The hiking trails and canoe routes are accessible from Kejimkujik Lake and lead deep into the park’s interior and to its remote island-dotted lakes. At several locations on the shores of Kejimkujik Lake, the soft slate has been decorated with petroglyphs reflecting life prior to and following the arrival of Europeans. Arrive in Digby on the southern shores of the Bay of Fundy. Overnight in Digby

Continue your drive along Nova Scotia’s northern shore and admire the Bay of Fundy, world-famous for its extreme tides and home to exhilarating tidal bore rafting. The vertical range between high and low tide can be as much as 15 m, the greatest rise of water on earth. Twice a day, the tides carry 100-billion tonnes of water into the Bay of Fundy. On your way through this beautiful stretch of land, you can visit many historic sites, such as the Annapolis Royal Historic Gardens, the Grand-Pré National Historic Site, and Fort Edward National Historic Site; providing an opportunity to learn more about Nova Scotia’s Scottish, Acadian and First Nations heritage. Overnight in Truro.

Welcome to Antigonish, the highland heart of Nova Scotia! Antigonish is a small town, rich in Gaelic history nestled in the north eastern part of the province. The wider county of the same name is full of rolling hills and beautiful farms, surrounded by lovely beaches. Warm, welcoming and ideally located, Antigonish is the perfect destination from which to explore the beauty of Nova Scotia's Northumberland Shore.

Today you depart your hotel and soon arrive at the narrows of the ocean and eastern reaches of the Northumberland Strait, at the doorstep of the island and commercial hub of Port Hawkesbury near the tip of St. Georges Bay. Continue on through gentle rolling fields of the bay area as it transitions into the beautiful Bras D’Or Lake lowlands. Arrive in Baddeck, often known as the gateway to the Cape Breton Highlands. Overnight in Baddeck.

With a day free in Baddeck, we suggest a scenic drive along the Cabot Trail into the highlands of northern Cape Breton. The trail runs past lochs and glens settled by Scottish Highlanders and along scenic coastlines settled by Acadians. You will meander through the rugged Cape Breton Highlands National Park, enjoying stunning views of sea-swept headlands, steep cliffs and tranquil beaches. Today you also board one of the Love Boats in Cheticamp for a breathtaking guided tour with commentary. The comfortable, covered touring boat sails out to observe whales, seals, eagles, seabirds and other wildlife along the scenic coastline of the Cape Breton Highlands National Park. Overnight in Baddeck.

Today you continue southbound, passing charming maritime communities that still celebrate their Scottish heritage. If time permits, you may wish to take a longer, circular route for a day trip to Sydney and explore one of the most important Canadian ports of World War II. Continue on to Bras d’Or Lake, considered to be one of the world’s best locations for sailing and boating. You may wish to stop in the small town of Baddeck, home to a fascinating museum dedicated to the life and works of Alexander Graham Bell, the inventor of the telephone. You arrive in West Bay at the southwest tip of the lake. Overnight in West Bay.

We encourage you to visit Inverness County and enjoy the wonderful seaside communities, sparkling beaches and miles of rugged shoreline. Walk, hike and bike on the stunning trails.

Depart West Bay and shores of Bras d’or Lake and travel through Port Hawksbury and over the Canso Causeway connecting eastern and western Nova Scotia. Once on the Western Shore, you may wish to alter your route and turn south to drive along the rugged southern Nova Scotian coastline. The coastal highway passes through great natural habitats, beach parks and dramatic shorelines along Nova Scotia's eastern Atlantic coast before arriving at Liscombe Mills. Overnight in Liscombe Mills.

Breakfast included. If time allows, make your way to the Liscombe Game Sanctuary, a 250-square kilometre area encompassing stands of virgin Nova Scotian forest and an abundance of wildlife, such as moose, deer, mink and muskrat. Follow the Marine Drive back to Halifax for your last night and before your return flight.

Want to alter anything? 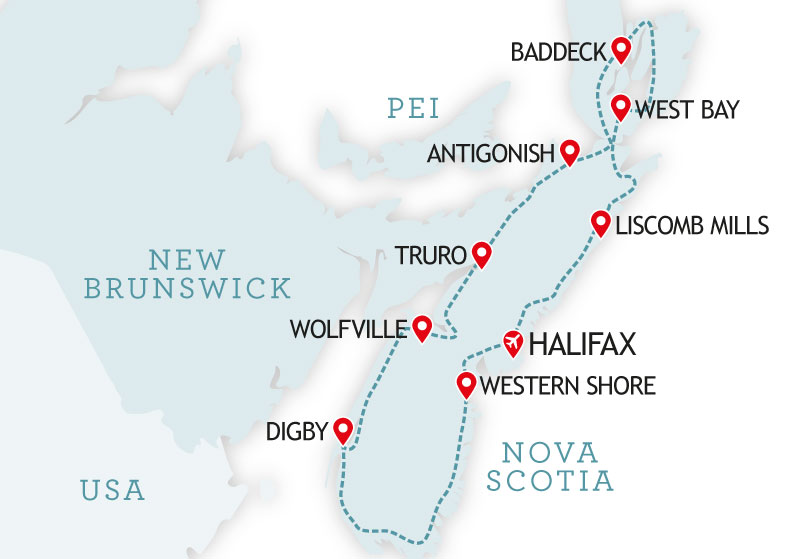 Selected departure dates between May - September

Please note prices and availability are subject to change