Where to find us

Visit Canada in the winter time and you will enjoy a whole different experience to the summer months. You may have to wrap up warm but you will still find that there is plenty to see and enjoy. Don’t worry about driving on icy roads, on this holiday you take the train and relax as you pass through the picturesque scenery of Ontario and Quebec, visiting the cities of Toronto, Ottawa, Montreal and Quebec City, plus a visit to the ice bound Niagara falls.

Upgrades
Celebrating anything?
Treat yourself and upgrade your flight or other holiday components

Toronto is your first port of call on this winter wander through Canada’s Eastern provinces. Transfer independently to your hotel and spend the rest of the day getting to know this cosmopolitan city.

Today you will discover the many identities of Toronto on a sightseeing tour of the city. Highlights include the provincial Parliament Buildings, City Hall, the financial district, Chinatown, residential areas, the waterfront. Admission to the CN Tower, standing 335.33 metres tall, is included giving you the opportunity to take in unforgettable views of Toronto and Lake Ontario in their winter best. Near the base of the tower, enter the fascinating Ripley’s Aquarium or take the short walk to the Ice hockey hall of Fame. The remainder of the day is free for further exploration, shopping or simple relaxation

Enjoy a full-day sightseeing excursion to Niagara Falls. The route takes you through the wine region of the Niagara Peninsula, famous at this time of year for its Ice wine. Marvel at the spectacle of the famous Niagara Falls, which can become completely frozen in some places. You will have ample time to take pictures and to Step Behind the Falls in the tunnels that run behind the thundering water or stroll into town. Highlights include a meal and a trip along the beautiful Niagara Parkway, which winds its way along the Niagara Gorge. Pass through the historic community of Niagara-on-the-Lake before returning to Toronto for the evening.

This morning, transfer independently to Union Station to board VIA Rail’s The Corridor train to Ottawa. You will be passing quaint little towns along Lake Ontario, the historic city of Kingston and the Thousand Islands region. Upon arrival in Ottawa, the remainder of the day is free to explore the charms of Canada’s capital city. Go for an ice skate along the famous Rideau Canal (designated by UNESCO as a World Heritage Site) which freezes in the winter and creates the worlds longest ice rink, if you fancy something warming try a Beaver tail pastry.

Spend your day sightseeing in Ottawa, there is a lot to fit in. You could see the Parliament Buildings, Embassy Row, the Royal Canadian Mint, the National Gallery of Canada, the National Aviation Museum, the residence of the Prime Minister and Governor-General, the national war Museum, the National Arts Centre and much more. Visit during weekends in February and celebrate winter at the fun filled Winterlude festival.

Today is your departure from Ottawa to Quebec City on board VIA Rail’s The Corridor. You’ll be leaving the capital region of Ottawa behind and heading for the Laurentians. Past Montreal, the train will be riding along the southern shore of the frozen St. Lawrence River passing snow covered towns and villages in the beautiful French-Canadian countryside. The remainder of the day is at your leisure to explore fascinating Quebec City.

Very few cities in the world are as beautiful in the winter as Quebec city. Today you will explore historic and modern Quebec City on a morning sightseeing tour. Quebec City is the only city in North America with city walls and gates earning it a United Nations World Heritage Site distinction in 1985. Discover the historical treasures and wonderful “joie de vivre” atmosphere of Quebec. Your guide will show you many points of interest throughout the city. The rest of the day is at your leisure to further explore the city or indulge at one of many fine restaurants, you are spoilt for choice.

Hop on the train today for a short ride to Montreal. This time, you’ll be travelling along the northern shore of the St. Lawrence River passing historic Trois-Rivières and charming Cap-de-la-Madeleine with its national shrine to the Virgin Mary. Upon reaching the bustling metropolis of Montreal, prepare for an afternoon of exploring the second largest French-speaking city after Paris. Walk down lively St. Catherine Street with its numerous shops, sample the fine cuisine and exuberant nightlife!

Spend the day exploring more of this fascinating city, including a visit to the Grevin Montreal museum which is included with your holiday. It might cold outside but that doesn’t stop the residents of Montreal and there are plenty of things to see and do even in the colder months. Head to Olympic Park, where a huge winter village is created with skating rinks, open fires on which to toast marshmallows and sleigh rides. Alternatively head underground where you will find acces to a whole host of shops and malls.

Today you depart Montreal for Toronto on board VIA Rail’s The Corridor train. Upon arrival at Toronto’s Union Station, take the Union Pearson express directly to Toronto’s International Airport to check in for your flight home.

Want to alter anything? 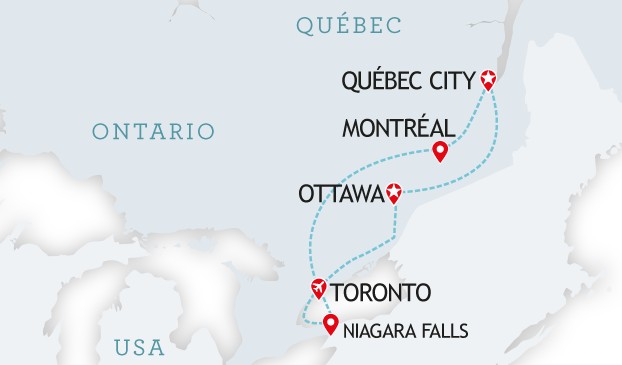 Please note prices and availability are subject to change